The Vikings wanted to explain why the mountains were there, why the storms thundered and why the waves moved. As such, it is believed that they came up with:

Ginnungagap was 'nothing', but had existed forever with an invisible God - 'All Father'. Then Yggdrasil the 'mighty tree' came into existence - together with nine worlds of Difference: one of fire, one of darkness, one of water ... Eventually, the world's offspring mixed in Ginnungagap - which gave birth to evil Ymir. Then Ginnungagap produced good Buri. Both had various offspring, and then joined battle. Evil Ymir lost - his body used to create the Earth: blood for the oceans, unbroken bones for the mountains, broken bones for the rocks, skull for the sky, brain for the clouds ... The Sun and Moon were forged into chariots - and told to ride across the sky. These were followed by Night and her son Day - who also took to their chariots. These were followed by Summer and his mistress Winter - who took to their dates. A pair of Trees then became the first humans - who had bestowed upon them: life, intelligence, mobility, sense and spirit.

Thus it was 'all explained' - and the Vikings could get back to the important pastimes: drinking, wrenching and pillaging! 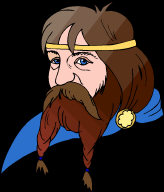 The 'creation myth' shows that the Vikings liked to attribute everything to various Gods. The following gives an insight into the properties the Vikings attributed to their gods: 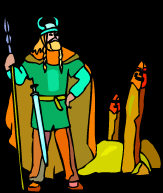 The Vikings believed that the Gods had sacred places. Here we consider just two: 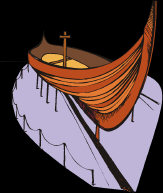 The Vikings believed this to be 'the end of the world' (i.e. the time when the gods themselves would die). They called this time 'Ragnarok' - and it is the time when the final battle would be fought between good and evil: Loki shall lead the forces of evil against Odin's good - with the battle resulting in the death of most. After battle, creation shall spark again!

I have always been interested in Vikings - since it 'seems to me' that they represented an important time in humanities past - where they helped make humanity stronger. It is also interesting to note that they settled (all be it briefly) on the East coast of America (Newfoundland) - which is 'quite a feat' considering they had to cross the Atlantic 'in nothing more' than their Viking Longboats. These would have been made of wood, featuring a single 'main sail' - with many oars, for when there was 'no wind'. To date, numerous remains of Viking Longboats have been found, usually 'buried beneath mud' - and in some cases, there is evidence that a mighty Viking warrior (or warlord) was 'buried inside their longboat'.

Within 'realms of fantasy' Vikings are usually found in 'one of two' incarnations:

Although personally 'I enjoy a mix of the two' when it comes to Viking fantasy ...

On the Teeth-like Rocks, in the Guise of a Western. At the Crest of a Tide, in the Cries of a War-host. That's just where you'll find him - Viking Dragon, and his Viking Longboat:

For when the Vikings go to War, is it not just their Longboats, and their Viking Warriors, that they take to Conflict! For there's also their Dragons, their Sentinels of the Skies ... In Mighty Red and Conquering Green, they match their Longboats - Sails and All. With twist of Silver, Armoured Clad, they match their Longboats - Shields and All. With cries of Roar, Piercing Shrill, they match their Longboats - Drums and All! For this Sentinel of the Skies, and his Viking Warriors, has just made - Landfall ... To Newfoundland have they come, this Western Dragon, and his Raiding Party - the first of their Kind, a Herald of their Viking War Fleet, from across the Atlantic. A Treacherous Expanse, of Open Ocean, that honed these Warriors, in thoughts of Odin: To War, to War! To Conquer, to Conquer! To Pillage, to Pillage! This Newfoundland :) From Scandinavia they spread, in Ages of Dark, with Rays of Light, that Shined the Way - yet always following, the Paths of the Warrior ... For this Viking People, tamed their Dragons, in Ages Past, to Fight for them ... These Viking Dragons, know of Norse - both how to Speak, and Riddle with Script. These Viking Dragons, know of Odin - both being Cruel, Kind and Wise. These Viking Dragons, know Valkyrie - both Wingless Angel, and Souls to Valhalla! For to them, to Die in Battle, at the front of a Viking War-host, donned Valkyrie's Hero: a Dragon's Glory, in which you'd find, the Bodies of the Slain, piled all around them :) For these Viking Dragons, are a Western Kin ... With Dragon Wings, they Soar the Skies, and Dance through Clouds. With Dragon Fire, they Burn the Woods, and Heat the Anvil. With Dragon Teeth, they Drink the Foes, and Grin of Wrath. With Dragon Armour, they Turn the Arrow, and Bend the Sword. With Dragon Claws, they Slash the Ways, and Slice the Enemy. With Dragon Tails, they Wrap the Rocks, and Anchor Themselves. For these Viking Dragons, know of - the Art of War ... A Dragon lands on a Precipice, to survey the Land. A Dragon elongates his Neck, to view Around. A Dragon sniffs the Air, to smell of Foe. A Dragon licks his Tongue, to answer This, of Riddle God: What is this - Newfoundland? Just the Jagged Outcrop, of a Mountainous Rock? Just the Patterned Layers, of an Eroded Sea Scape? Just the Alcove Shape, of a Secluded Lagoon? But with a Sniff and a Lick, does this Dragon know, the answer to this Conquest's Riddle: for he's a Viking Dragon, that's been Bred and Raised, in the Castles of War :) He smells the Tide of Conflict, ten thousand Foes to march on him. He tastes the Air of Battle Lines, ten thousand Foes to come to him. He feels the Power of Enemy Commander, ten thousand Foes to aim at him. But this Dragon does not Cower, for he's a Western Might! He Plants his Feet, and Wraps his Tail, around his Teeth-like Rock. He Focuses his Eyes (through Armoured Helm), knowing well - Horizon Glare. He Roars a Dragon's Defiance, amongst the Cliffs of Armoured Sea - calling in he's Dragons Kin. For this Viking Dragon's, just the Herald, of a thousand Viking Longboats, and their Dragon Sentinels! And if he Falls, before they get here? Then to Valhalla will he go, on the Wings of a Valkyrie, off from Newfoundland - to Odin's Dragon Land :)

On the Snow Covered Slopes, in the Guise of an Angel. At the Rooftops of the World, in the Herald of an Arrow. That's just where you'll find her - Viking Valkyrie:

For when the Vikings go to War, is it an Honour for their Fallen - to Die in Battle ... Whether born of Axe, or born of Sword. Whether born of Bow, or born of Fire. It matters not! For Valkyrie walks, the Battlefields of the Slain - knowing just is, what it is she wants :) The Bravest of the Brave. The Strongest of the Strong. The Deadliest of the Dead. For these Fallen Viking Warriors are to her, nowt but the Heroes of a Viking Hel ... To some comes the Kiss of Death - to Valhalla, to Valhalla! To others comes the Kiss of Life - to Rot, to Rot! For only to Valhalla, do the Heroes go ... These Viking Warriors, Masters of Sword. These Viking Warriors, Masters of Axe. These Viking Warriors, Masters of Fire. These Viking Warriors, Masters of Wrath! As it is with these Heroes, and their Fighting Ways ... Would they charge a Battle-line, hundred to one? Yes! Would they hold a Mountain-Pass, thousand to one? Yes! Would they jump into the Midst, of an Army of Men? Yes! For to these Heroes, is the Eternity of their Names, more important than their Lives. As in Viking War-cry, will their Names live forever! As it is with this Valkyrie - and her Kiss of Death ... Her Curves of Beauty, that be-nigh her Blood Lust. Her Sword of Ascension, that dishes-out her Judgement. Her Looks of a Goddess, that be-spell no Angel. For she's a Viking Ghost Warrior herself - who with a flick of her Sword, dispenses her Judgement. A Herald of Odin, who's versed in Seduction - who with a twist of her Blade, brings Death to the Mighty. As she walks through this Battlefield, eyeing the Slain. As she stands in this Battlefield, asking the same ... Are you a Mighty Hero, out of the Viking Wars, who faced Death in Battle, against overwhelming odds, where none but the Strongest and the Bravest, have the right to be called, a Viking Hero out of Legend? Yet you fell this Day, amongst these Snow Covered Slopes - though your Fury was known, amongst the ranks of these Men? Yes ... Then I fly you to Valhalla, just in time for this Night, with the Feasts of the Mighty, and the Healing of the Angels. For you - Viking Warrior, I bestow my Kiss of Death :) To Valhalla, to Valhalla! And after your Feast this Night? Well ... Tomorrow, to Battle shall you go ... Blood shall be spilled. Arms shall be broken. Shields shall be splintered. Skulls shall be cracked. Swords shall be swung. Axes shall be arced. Bows shall be thrown. Fires shall be cast. To Battle, to Battle! In the Halls of the Slain, in my Master's - Valhalla :) For your a Mighty Viking Warrior, who shall Fall again, Tomorrow's Day, but shall Rise again, Tomorrow's Night! Feast with the Mighty, then Fight again. Then Fall again, then Feast again ... But your Name! Shall be known by Odin, and heard each Day, upon thy Battlefields of Valhalla, Forever and Forever, your Name shall be Known, my Mighty Viking Hero, my Mighty Viking Warrior, in this Viking Hel of Valhalla, in Odin's Halls of the Slain :) For in Valhalla, shall your Viking Name, be both War-cried and Remembered, Forever and Forever! Viking Valkyrie - Viking Ghost Warrior :)